It’s raining unicorns in India amid an unprecedented funding spree for Indian startups across sectors. In just eight months this year, 21 startups have already made it to the unicorn club. Well over $20 Bn has been raised till July this year, with several of the rounds producing Indian unicorns in 2021.

The unicorn story of 2021 is the one with many firsts, as the ecosystem witnessed the entry of the first healthtech, social commerce, epharmacy unicorns. The total count of Indian tech startups that have a valuation of over $1 Bn to 63 till August 10, 2021.

This month (August 2021) already, we have seen four startups make it to the unicorn club, including the first ever crypto unicorn. BharatPe became the 18th unicorn in India, with its $370 Mn Series E round this week, which was followed by the entry of Mindtickle, upGrad and crypto exchange CoinDCX.

At this rate, India will manage to get more than 100 unicorns by 2023, much earlier than the previous estimation of 2025 as suggested by Inc42 Plus reports in the past. 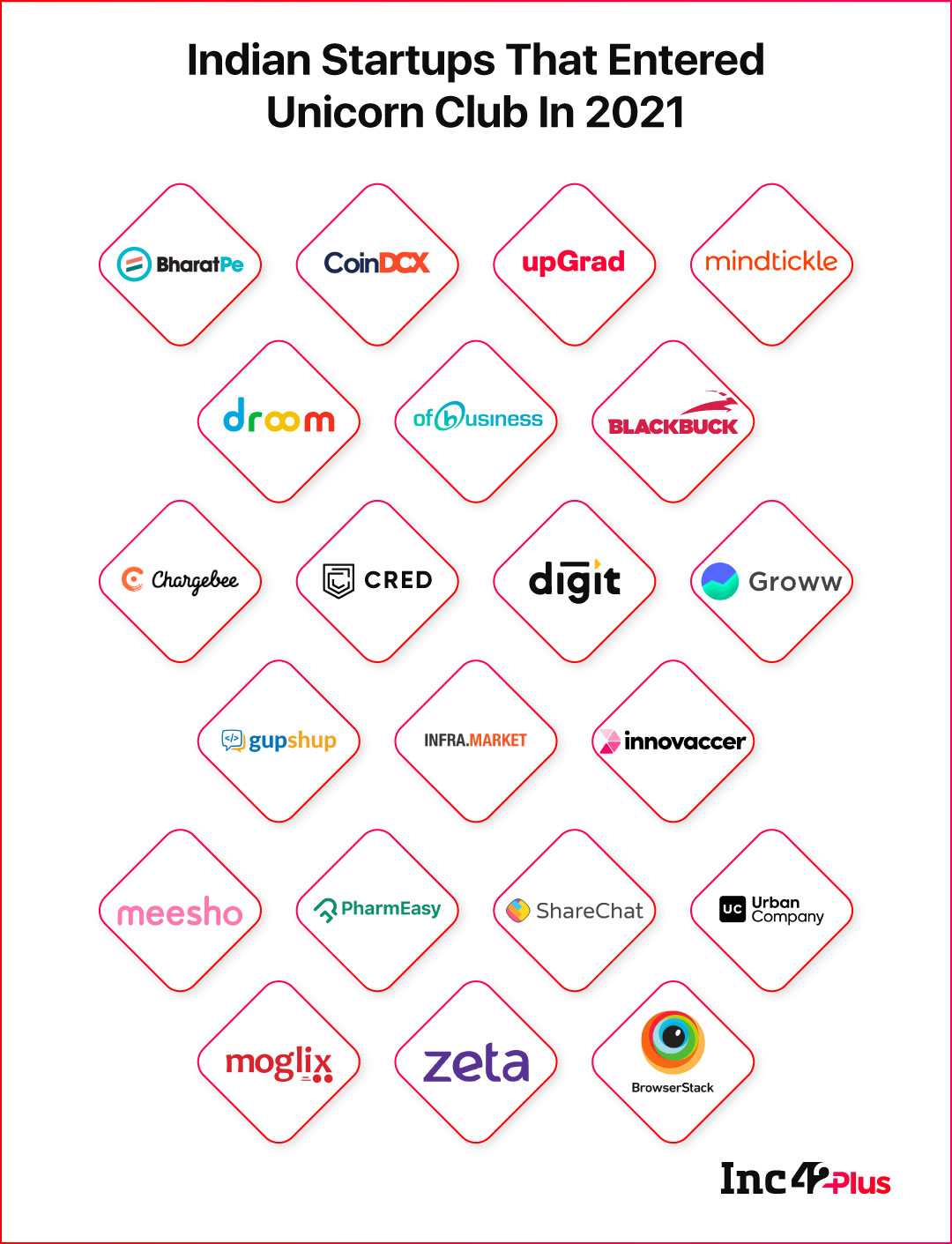 As per the latest tally, ecommerce, fintech and enterprise tech are among the popular sectors in the Indian unicorn club. There are 12 ecommerce unicorns, namely Flipkart, Snapdeal, FirstCry, Moglix, Infra.Market, Udaan, Paytm Mall, Droom and others. The fintech sector has 12 startups in the list with Paytm, PhonePe, Zerodha, Razorpay, Pine Labs, CoinDCX being examples. Enterprise tech startups in the unicorn club include Zenoti, GupShup, BrowserStack, Freshworks, Zoho, Druva, Icertis, Ofbusiness, BlackBuck, Mindtickle and others.

Startups That Entered The Unicorn Club In 2021

Bengaluru-based insurtech startup Digit Insurance was the first startup to enter the Indian unicorn club in 2021. The company had raised $18 Mn (INR 135 Cr) from existing investors A(! PArtners, Faering Capital and TVS Capital in January, at a valuation of $1.9 Bn.

This was the company’s second external funding round, the first one coming in January 2020. The company had raised $84 Mn (INR 614 Cr at current conversion rate) as a part of this round, in which Indian cricketer Virat Kohli and Bollywood actor Anushka Sharma infused about $340K (INR 2.5 Cr). Overall, the company has raised $200 Mn to date from for internal and external infusion.

Digit Insurance is a tech-driven general insurance company, founded in 2016 by Kamesh Goyal and Prem Watsa’s Fairfax Holdings. The company offers customised policies on health, auto, travel, smartphones, commercial properties such as stores and holiday homes. It claims to have recorded a 31.9% growth between March 2020 to December 2020, with 20 Lakh Indians opting for its illness insurance product which offered protection against Covid-19 and seven vector-borne diseases including dengue, malaria and others

The strain on global healthcare due to Covid-19 was enormous and shocking with the fear of mass infection hanging over the public. If not for the healthcare providers putting in the extra effort to ensure smooth recovery of those infected, the global tally of deaths would have been significantly higher. As the world stepped into the lockdown, healthcare became of utmost importance as did solutions for the sector.

Innovacer was one of the shining stars of the Indian startups ecosystem, and ended up becoming the first Indian healthtech unicorn. The company which develops solutions for western markets like the US, analyses healthcare data to provide actionable insights to healthcare providers, hospitals, insurance companies and other organisations and businesses.

The product is used by several governments and private institutions to maintain medical records of more than 3.8 Mn patients and generates savings of $400 Mn for healthcare providers. The startup aims to take its current number of patient records to 100 Mn+ and reach out to 500,000 caregivers over the next five years.

The Indian social commerce segment may be at a nascent stage at this point but it is poised to grow at a compound annual growth rate (CAGR) of 55%-60% to reach $16 Bn-$20 Bn gross merchandise value (GMV) by 2025. One of the biggest milestones of the segment has to be Meesho’s entry into the unicorn club, which will have an overall impact on the segment and its growth momentum.

Founded by IIT-Delhi graduates Aatrey and Sanjeev Barnwal in 2015, Meesho is an online reseller network for individuals and small and medium businesses (SMBs), who sell products within their network on social channels such as WhatsApp, Facebook, and Instagram. The platform has about 13 Mn individual entrepreneurs, bringing the ecommerce benefits to 45 Mn customers pan India.

The company claims to have registered 100K registered suppliers to over 26K postal codes across 4,800 cities, generating over INR 500 Cr ($68 Mn at current conversion rate) in income for individual entrepreneurs. It has raised $415 Mn funding to date, from investors like SoftBank, Prosus Ventures, Facebook, Shunwei Capital, Venture Highway and Knollwood Investment.

It competes with other younger companies GlowRoad, Dealshare, CityMall and Bulbul, who too have a lengthy list of investors backing them.

There are very few Indian unicorns that have maintained profitability from the very beginning. This year, there was another such startup, Infra.Market, that entered the club riding on its profitability and strong growth. The company, founded by Aaditya Sharda and Souvik Sengupta in 2016, is a B2B online procurement marketplace for real estate and construction material that leverages technology to offer fair pricing and a smoother procurement experience for its customers.

The platform aggregates demand and matches it with the supply chain, with wholesale pricing on materials, along with affordable credit or financing, which is not always available for small businesses in this sector.

With eyes on market dominance and the unicorn club, API Holdings had set out to forge a merger between its subsidiary PharmEasy and its rival Medlife in 2020. After the merger came through in the latter part of last year, the company was able to achieve one of its goals — entering the unicorn club. The company raised $323 Mn in a Series E funding round, at a valuation of $1.5 Bn. Notably, it is the first Indian epharmacy unicorn.

PharmEasy was founded in 2015 by Dharmil Sheth and Dr. Dhaval Shah to the chronic care segment and offers a range of services such as teleconsultation, medicine deliveries, and sample collections for diagnostic tests. It connects over 60K brick-and-mortar pharmacies and 4K doctors in 16K postal codes across India.

The platform also offers a SaaS solution for pharmacies to use in procurement combined with delivery and logistics support, and credit solutions. It claims to have served over 20 Mn patients since inception.

The company’s merger with Medlife was in the aftermath of the rising competition in the segment. Reliance had acquired rival Netmeds, Amazon launched its own epharmacy vertical and Flipkart too was contemplating its entry. The only other competition left was 1mg, which too was in talks with the Tata Group for an acquisition deal. The company hopes to fend off the competition to reach 100K pharmacies in the next year.

With only INR 57 Lakh ($76K, at current conversion rate) as operating revenue in the financial year 2020, Kunal Shah-led fintech platform CRED entered the unicorn club at a whopping valuation of $2.2 Bn.

Several big names of the VC…

Read More:Here Are The 21 Indian Startups That Entered The Unicorn Club In 2021