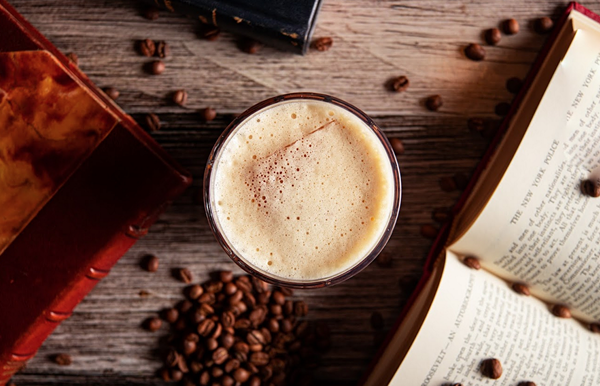 During a recent birthday bar crawl stop on Tremont Taphouse’s patio, I happened to notice, only because a good friend stopped drinking last year and had been exploring N/A brands, that when two of the folks in our group ordered Brewdog’s Stout AF, they had ordered non-alcoholic beers.

One, I later gathered from context, was sober. The other, who had a burly IPA at the previous stop at Edison’s, was not. But in both cases, for whatever reason they wanted one, Taphouse was there for them.

And not only did they have the option to order an N/A beer (and a quite good one) instead of being relegated to a water or soft drink, they weren’t limited to one option or a single style. They could have alternately scored a dry-hopped Euro pale lager from Clausthaler or the Weihenstephaner hefewissbier, two other N/A options on Taphouse’s menu.

“It used to be just O’Douls, and it was, don’t get me wrong, fine, but it’s a fizzy yellow lager, and that was the only flavor,” says Chris Lieb, owner and partner of the Taphouse and the Butcher and the Brewer. “It’s important because not everyone drinks but you still want to have a beverage with friends. And now, there’s just really good selection and variety with more breweries making N/A beers.”

And they got to order the beers by name off the menu, which sounded like any other beer, and not invite questions about why they weren’t drinking.

Lieb says that’s a side benefit of the growing roster of non-alc brews.

“A friend of mine quit drinking, for medical reasons, but for him, it was still a social thing to have a drink, and he orders the Weihenstephaner,” he says. “You still have a bottle of beer in your hand, and it sounds like you’re just ordering a beer, so no one pays attention. You don’t want to say, well, I’m not drinking because my pancreas will shut down.”

Where Tremont Taphouse might have a few years ago been an outlier, it’s now part of a growing trend of Cleveland bars and restaurants that boast robust non-alcoholic beverage menus and cocktail programs to serve patrons who aren’t drinking, for whatever reason.

Those reasons have always existed, whether someone’s moderating their intake, serving as a designated driver, on a medication that’s contraindicated for alcohol, pregnant, in recovery, watching their calories, or simply more comfortable with something that’s not going to affect their decision-making or behavior in the moment.

Those people still want something flavorful, something that signals they’re relaxing at dinner or a concert or a post-work coworker happy hour. Something special. And, in many cases, something worth drinking that doesn’t make them stand out.

It’s obviously not universal, but for many, it’s uncomfortable and dispiriting to say, “I’ll just take a water,” or, “I’ll just take a Diet Coke.” And you know it’s both uncomfortable and dispiriting because they almost always say “just.” It’s a linguistic tick that means there’s nothing for me here. “Just” means they’re a lesser customer or will get a lesser experience. “Just” is an apology, to the server for not ordering something more expensive, to whoever they’re with for not drinking and maybe being less fun, and to themselves for being different, for making an order that might as well be a big neon sign alerting everyone to take notice.

For a long time, “just” is what was available.

In recent years, the customer base has expanded from those who simply aren’t drinking to include those who are drinking less, those who are adding N/A beers into their rotation because of fitness or lifestyle choices, not to mention those reckoning with and course correcting on overconsumption during the pandemic. Trends like Sober September and Dry January have also introduced so-called ‘sober-curious” drinkers into the market in larger numbers.

Demand, largely ignored or vastly underrated in previous years, drove supply, with craft brewers like Brewdog branching out into non-alcoholic brews, entire breweries dedicated solely to non-alcoholic offerings such as Well Being and Athletic Brewing Co. forming and quickly expanding, and all the big names frantically attempting to carve out a slice of the growing market.

Some are brewed to be non-alcoholic (technically less than 0.05%), and are generally lower in calories, while others are dealcoholized after brewing, which naturally leads to a slightly bigger caloric punch. Either way, you’re looking at something packing flavor and no boozy effects.

Now, those craft N/A options are dotting Cleveland menus (though not enough) and even your friendly corner bar is likely to stock at least Heineken 0.0, which the company launched in 2019.

“There’s been a massive trend in the N/A business going into bars,” says Rita Gaertner, director of marketing for Beverage Distributors. “Heineken 0.0 was a big focus for them this year. They brought it in, it was killing in the U.K., and we were like, ‘…Oh okay,’ but we’re having great success in our territory.”

In the last 90 days, Gaertner says, they have a 45% distribution rate across their 2,500 alcohol-buying accounts in Cuyahoga County for Heineken 0.0. One year ago, maybe 300 accounts were stocking it.

“We were a bit taken aback,” she says. “A non-alcoholic is your main focus? But we’ve more than doubled our distribution. They’re asking for it, we get emails asking if we distribute it.”

Read More:Keeping It 0.00: Why More Cleveland Restaurants and Bars Are Beefing Up Their